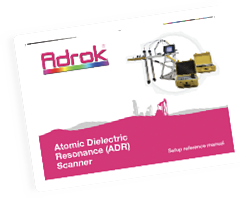 Atomic dielectric resonance (ADR) technology was developed by Dr Colin Stove, as an improvement over synthetic aperture radar (SAR) and ground penetrating radar (GPR) to achieve deeper penetration of the Earth’s subsurface and high vertical resolution through the creation and use of a novel type of coherent beam. ADR technology is faster, greener, cheaper and, an alternative to the conventional methods providing geophysical services.

ADR is used as a geophysical technique to provide a precision instrument for the accurate geological recognition of rock layers and identification of rock types by transmission through the rock medium as well as reflection from each subsurface rock layer.

Adrok’s technology has been developed to provide data outputs relating to: (i) stratigraphy (like seismic imagery); (ii) information on rock characteristics (like well logs); and (iii) rock petrography (like cores). It measures subsurface (a) dielectric permittivity; (b) spectral (energy, frequency and phase) and (c) material resonance, from ground level, without physically boring the ground. These electrical measurements produce what Adrok has dubbed “Virtual Boreholes”.

The transmitted ADR wave packet (see Figure 1 for an example) contains several frequency components in the range of 1-100 MHz where the low frequencies achieve deep penetration whereas the higher frequencies enhance vertical resolution. When rocks of different compositions and textures have been exposed to ADR wave packets, a range of energy and frequency responses are detectable by suitable receivers. The recorded data describe how rocks and minerals, including hydrocarbons, interact with the electromagnetic radiation as it passes through them and pinpoints their composition. The technology measures the dielectric permittivity of the subsurface as well as characterizing the nature of the rock types based on analysis of both the spectroscopic and resonant energy responses. 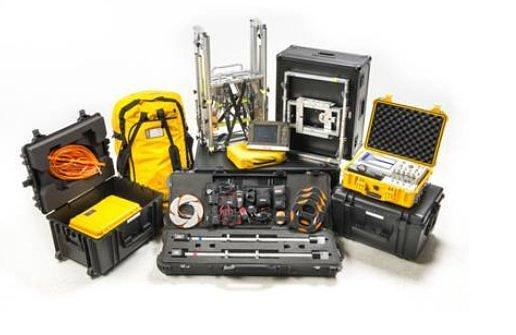 For P-Scans the two antennas are moved parallel to one another along the full scan line length. P- Scans are profile scans of the subsurface collected by the ADR system from ground level. This scan produces a 2-dimensional cross-sectional image of the subsurface that offers opportunity for structural and stratigraphic mapping of the sub- strata.