Efficacy test of the application of ADR technology in Elkview coal mine, Canada

The aim of this project was to test the efficacy of the ADR technology in a number of different targets in the coal mine in Elkview, Canada. The field geophysical survey was conducted in July 2013 by Adrok on behalf of Teck Resources Limited (“TRL”) in Elkview property. Data was collected by Adrok’s survey crew in three different sites with individual objectives in each of these. The objective in the first site was to locate the conveyer belt tunnel and the region of the fault running through the mountain. In the second location the target was to locate the edge of the original rock layer and the depth of the ground water. And finally, the objective of the third site was to identify the depth of the original bedrock beneath the overlying unconsolidated dump material.

The main challenge in this project was to ascertain if ADR technology could locate the conveyer belt tunnel.

Elkview is located approximately 3km east of Sparwood in south-eastern British Columbia. The coal mine at Elkview in the Elk Valley area is one of the five large open-pit coal mines that are operated by Teck Coal Limited. The mine at Elkview is part of the Crowsnest coalfield, which is in the Fernie Basin, a broad north-trending synclinorium2. The host rocks in the Crowsnest district are of the Jurassic Kootenay formation. The strata have been extensively folded and faulted helping in the increase of the apparent thickness of the seams in some areas.

In this site Adrok conducted both horizontal and vertical scans in order to try and find the tunnel and the fault running through the mountain (Figure 2). 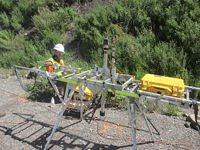 Based on the processing and interpretation of the horizontal scans, a boundary between the surrounding rock and the tunnel has been interpreted to exist at the survey point 26-28m along the scan line. The depth (distance within the mountain) of the tunnel has been estimated to be 130m +/- 20m based on the Stares analysis, dielectrics, energy response and WMF logs. Low DC values (indicative of air presence) are observed at 110-116m depth (Figure 4). On the other hand, Stares analysis (i.e. the individual stare scans were combined into a transect scan and the amplitudes of the received energy were analysed), energy response and WMF logs suggest a depth of 130-160m (distance within the mountain). This disparity could be caused by manual tracking errors. In addition, a zone of low returned energy is correlated at a depth of 190-240m (distance within the mountain) across the scan line, which has been interpreted as a fault zone.

The energy response and weighted mean frequency logs have been extracted from the vertical dataset of scans to find the roof and the slope of the conveyer belt tunnel. According to their interpretation, the roof of the tunnel is suggested to be at a depth of 48m (vertically) and its slope roughly 020° degrees.

The depth of the original rock layer was identified at 30m depth in the survey point of 50m by correlating a peak in WMF log (indication of a change in the geology at this point) with a change in the E-ADR image (Figures 7 and 9). Processed P-scan image clearly shows a fault zone between 20m and 35m of the survey scan line (Figures 8 and 9).

Regarding the third survey site, Adrok combining the results of DCs, harmonics, energy response and WMF logs suggest a boundary between the overlying unconsolidated waste material and the underlying original rock at a depth of 111m +/- 30m. This error may be due to the compaction of the lower portion of the dump material or the similarity in composition of the dump material and the underlying rock, which may case similar energy returns and complicating the identification of the boundary.

On the occasion of this project, Adrok demonstrated that its technology can find applications not only in lithology identification and mapping projects (e.g. coal layers) but also, in geotechnical works to map different volumes (e.g. to locate tunnels, old mine workings, etc.) before starting the process of digging the ground. Consequently, ADR technology is a faster, greener, cheaper and non-destructive geophysical technique, which can be applied in a variety of different cases depending on the clients’ needs.